New professional goals, new personal expectations, and holidays often bring things into focus. As a result, the first day back at work is the moment to make some adjustments and improve day to day life. And for some, this comes about through a little infidelity. According to Gleeden’s latest survey covering more than 12,000 of its members, adultery is the unspoken response to the return to work. The European leader of the extramarital dating, with more than 3.6 million members, has noted a significant surge in activity throughout the month of September.

Summer holidays can be testing times for couples

According to a study by the University of Washington, the end of the holiday period is accompanied by a peak in the number of couples separating, with more demands for divorce than at any other time of the year.

If for some couples this is the end, others prefer to sustain their relationships by turning to infidelity. This is probably why 79% of the members interviewed by Gleeden admit to being more active on the site at the end of summer.

For sure, while the summer period allows some to reconnect with their partners and start afresh, for others, just the opposite is true. So, 53% of members surveyed report that they spend more time on the site on their return to work because the holidays had opened their eyes to their relational and emotional frustrations.

The holidays can also be experienced as being irksome, where the relationship and family life are overwhelming. For 38% of the members surveyed, going back to work is experienced as a relief, as a return to freedom, and often followed by a desire to have an affair.

Finally, 8% of the members questioned admit to using the site in September more often, simply to offset the dreariness of returning to work. Some are more brazen than others … 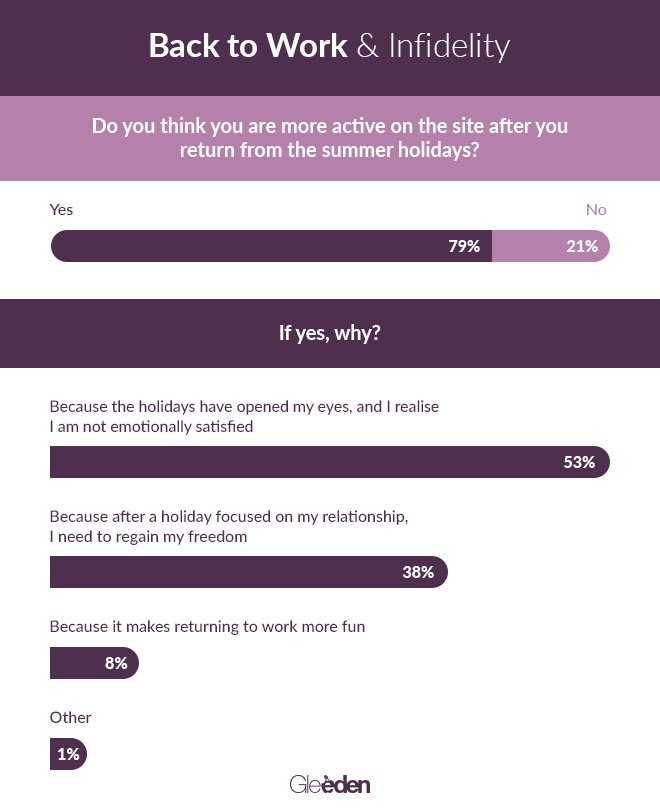 Without doubt, infidelity is an unacknowledged trend that is part of returning to work. This is can be seen by the figures recorded by Gleeden during the months of September over recent years. In 2016, for example, membership registrations increased by 275% in comparison to the previous three months, peaking on the 1st September, same day as the start of the new school year.

It’s not only the registrations that increase. Members too, are much more active during this period. The site noted a significant increase in private messaging by male members. More discreetly, women prefer using ‘crushes’ or the famous ‘virtual gifts’; the functions set up by Gleeden, allow members to seduce with more subtlety and are exceptionally successful during September, annually.

So keep a close eye on partners around this time of year in 2017!

Children with Unsupportive Parents Are More Likely to Be Both Bullies and Victims, According to New ...
Personality Matters, Even for Squirrels – According to New Study
CBD Gummies – Fact vs Fiction
How EMDR Therapy Can Help Improve Your Performance
Teens with Secure Family Relationships 'Pay It Forward' with Empathy for Friends
Does My Baby Need a Probiotic Supplement? Q&A with Amanda Williams, Nutritional Therapist and CEO at...
6 Things You Can Do to Support the Senior Community
A Higher Level of Goodness: Achieve Your Goals This New Year
How Zero Waste Is Good for the Environment and Your Well-Being
Why a Lack of Sleep Makes Us Depressed... and What We Can Do about It
Here's How to Respectully Portray People with Mental Illness in Films and Online Media
Is Empathy a Gift or a Curse?
More Articles
Loading Comments...
Copy link
CopyCopied
Powered by Social Snap