Ignoring half the world’s population takes concerted effort or at least some level of collusion. Academic attention given to women’s mental health and addiction highlighted by several editorials from leading academic journals over the last year suggest our collective ignorance is no accident.

The Lancet Psychiatry draws attention to the way information gathered in clinical trials is based on disproportionate sampling of men.

Women were often excluded from trials particularly of new medicines for fear that these substances may be particularly toxic to women. Paradoxically, a greater proportion of women then report adverse reactions to these medicines.

At the same time, the journal of Addiction mirrored the concerns raised in the Lancet but went further suggesting that the problem was systemic, in that women are underrepresented at every level of scientific enquiry, although the differences are most acute higher up the research community hierarchy – with only 29% of senior editorial positions occupied by women.

Gender differences are common in all areas of health including addiction, but have not routinely featured in evidence gathering and as a consequence policy. For example, a recent review of two decades of research exploring the factors associated with dropping out of treatment, a significant issue for services, found that 48% of studies failed to investigate the association between gender and leaving treatment early.

An example of how little we know about these combined problems for women became apparent when we investigated the sex ratio of people who had been admitted to hospital with a diagnosis of cannabis psychosis. Despite males outnumbering females by a ratio of 2:1 in their use of cannabis this ratio extends to 4:1 for admissions due to cannabis psychosis, as shown in the figure below: 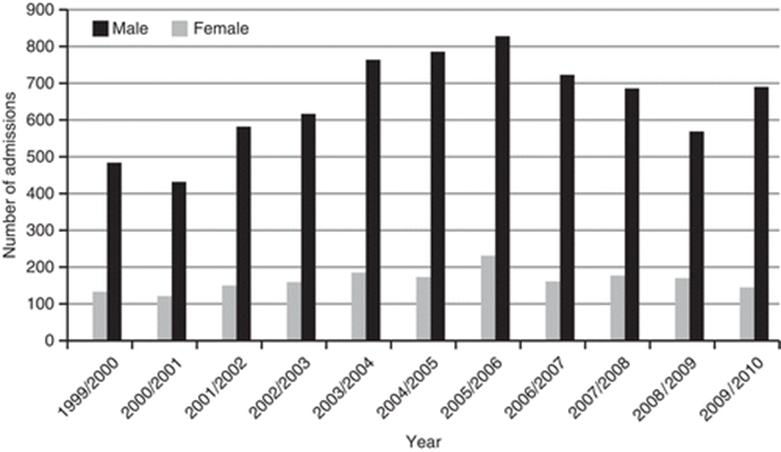 We can only speculate as to why there might be these differences in admissions, it is possible that women have some biological protective factors which reduce the risk of developing psychosis following exposure to cannabis. Or it could be that mental health professionals view men as riskier when psychotic and using drugs, a perception that might lead to hospital rather than community care as a way of managing such a perceived risk.

There is now a Drug Treatment Data Monitoring System which provides data on the socio-demographic characteristics of those seeking treatment, substances used, type of treatment accessed and a series of ‘performance’ measures including waiting times, rates of successful completions and indicators of effectiveness. We are fortunate to live in an age when such data are not only publicly available but it is possible to manipulate the data and look at specific subgroups of drug treatment users.

The level of detail becomes much less when the data are broken down by sex. A more vivid picture of the characteristics of women who enter drug treatment can be gleaned through the generously-funded drug treatment outcome research studies which have been funded in the past.

They have been influential in highlighting the distinct characteristics of women drug users. It is in terms of health – both physical and mental – that we see some of the most striking gender differences with far higher rates of chronic health conditions and mental health problems among female drug users.

Recent research point to the need to understand how the small but significant group of women who enter drug treatment are different from their male counterparts. A recent study of the everyday lives of recovering heroin users compares female and male pathways into and out of drug use.

Crucially, the researchers argue that while there is strong evidence that gender shapes drug users’ experiences, we should not make assumptions about individuals based upon their gender. Research needs to take account of the many different factors which might be influential; for example, age, ethnicity, socio-economic status and sexual orientation.

The effect of ignoring gender differences within drug policies is to reinstate the male drug user as the norm, with little recognition of the distinctive needs of female and male drug users or the potential for policies to impact differentially on women and men. Moreover, if we gloss over the salience of gender in research and policy this has consequences for the way mental health and addiction treatment is organised and delivered.

Research needs to look beyond the treatment setting, challenging as this might be, there is a pressing need for equality. Attending to women and addiction would paradoxically improve the response and interventions that we could offer to males. As any person who has recovered from a drug problem will testify, until we admit we have a problem, change is unlikely.

Dr Ian Hamilton is a Lecturer in addiction and mental health at the University of York. Ian trained and worked as a mental health nurse in South London.

Dr Emma Wincup is a Senior Lecturer at the school of law of the University of Leeds. Her most recent research has focused on drug use and its control.

Mental Health Campaign Uncovers Loneliness and Perfectionism as the Two Most Prominent Issues Facing...
Greenbone Ortho Achieves Aim of Recruiting 15 Patients into the GreenBRIC Study in the Treatment of ...
Transgender and Gender-Diverse Individuals More Likely to Be Autistic
Research Reveals Drug Targets for Memory Enhancement
Sports Injuries and Mental Well-Being: 5 Ways to Stay Positive
How to Support Each Other Through Loss and Bereavement
7 Ways to Outsmart Christmas
Remote Worker’s Guide to Focusing on Mental Wellness
3 Great Incentives to Offer Your Employees Right Now
The Rise of NoLo: How the Trend Is Changing?
How Can You Take Advantage of Telehealth Services for Mental Health During Self-Isolation
Why Are Telehealth Psychologists Gaining Popularity in Australia?
More Articles
Loading Comments...