Cite This
News Release, (2022, July 13). Which Age Group Are Most Likely to Be Addicted to Video Games? The Results Might Surprise You. Psychreg on Cyberpsychology. https://www.psychreg.org/which-age-group-most-likely-addicted-video-games-results-might-surprise-you/
Reading Time: < 1 minute

In an increasingly digital world, most people own multiple electronic devices with screens. But many parents worry about the effects of screen use on themselves and their children.

Gaming has become a defining addiction of the 21st century, however, it’s usually associated with children and teenagers.

Private rehab clinic Delamere has conducted research to reveal the most likely age group to become addicted to gaming, and the results are very surprising. 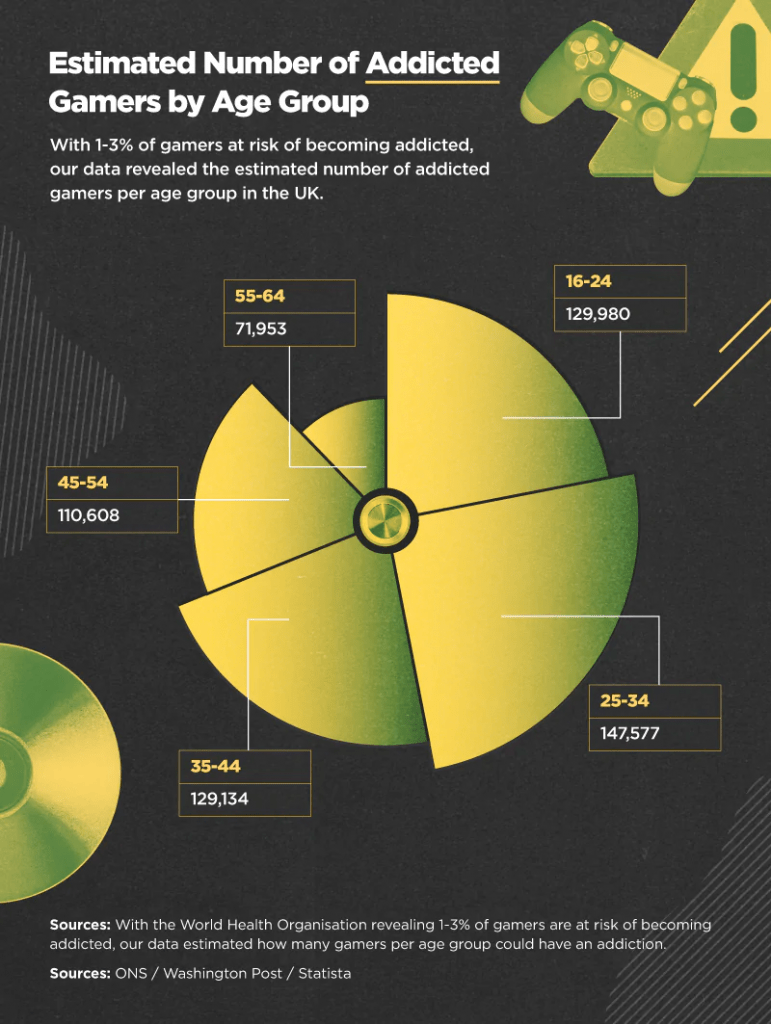 Catherine Carney, psychiatrist at Delamere, said: ‘Interestingly, despite presumably having very different lifestyles, the three top-ranked demographics had very similar numbers of addicted gamers. This highlights the fact that, despite what society may assume, younger people are not more susceptible to becoming addicted to gaming than older people are.

’25–34-year-olds would have more financial freedom, making it easier for them to buy the latest games, consoles and upgrades, while 16–24-year-olds may have to rely on somebody else to make extravagant purchases for them.’

Psychological 'Signature' for the Extremist Mind Uncovered by Cambridge Researchers
How Robocop 2 Overlooks the Psychological Canon of Modern Cinema
November Awareness Campaigns Round-Up: Health and Well-Being Events
New Research Reveals Men Are 'More Worried About Their Health Than Ever' – 10 Simple Steps to Get Ba...
Drug Relieves Persistent Daydreaming, Fatigue, and Brain Sluggishness in Adults with ADHD
New Study May Reveal Link to Lipids Playing a Key Role in Parkinson's Disease
How to Recognise Adolescent Eating Disorders and Get Teens Help
Young Men are More Likely to Be Bullied, According to New Research by The Mix and YouGov
Being Alone and Socialising with Others Each Contributes Differently to Personal Growth
New Research Shows Half of Brits Prefer Getting Medical Advice on App Rather Than in Person
Newly Discovered Compound Could Repair Myelin Fibres and Prevent the Progression of Neurodegenerativ...
Self-Sabotage: Coming Up with the Best Excuse to Remain in Your Comfort Zone
The Impact of Mental Health on Employees' Productivity
Going Green Can Be Beneficial to the Mental Health of Older People
One Size Doesn't Fit All – When It Comes to Products for Preventing HIV from Anal Sex
How to Stay Safe from Drugs and Alcohol This Bank Holiday Weekend?
50 Inspirational Mindset Quotes to Help You Keep Going
Researchers Explore How Children Learn Language
We Need to Address Misconceptions and Poor Attitudes Towards Concussion
How to Choose the Perfect Cannabis Product for Restoring Mental Health
More Articles
Loading Comments...