Preply has conducted a study, the Language Seesaw, to highlight and predict what languages will be dominating by 2050 and what ones are at risk of disappearing. If you’re looking to learn a new language, Preply may have made the decision of what one easier for you.

With different cultures, traditions and languages, our world is constantly evolving and changing. There are currently more than 1,739 languages spoken today, and more are being created every day while others are on the decline, heading towards extinction. Approximately 40% of today’s languages are at risk of disappearing, while those who are currently dominating are set to continue to grow in popularity.

Mandarin predicted to keep its leadership

By 2050, Chinese Mandarin will continue to be the language with the most native speakers. But due to birth rate restrictions, over the next 29 years, it’s predicted to grow by just 27%; compared to the English and Spanish language that is set to grow by 44%. Another problem that the Mandarin language may face is that it is only spoken in one country: China. Therefore, the future of this language relies heavily on the politics here.

Demographics is going to play a huge part in language domination and worldwide, there are approximately 21 countries that speak Spanish and 58 that speak English. These range from developed to developing societies with diverse birth rates.

Where do the official languages of the United Nations stand?

Out of the six official languages of the United Nations – Mandarin, Spanish, English, Russian, French, and Arabic – only Russian and Arabic are predicted to decrease at rates of -31% and -26%, respectively, while French will see an increase of 7% with 85.2 million expected native speakers by 2050, along with the increase of 44% for English and Spanish and 27% for Mandarin. 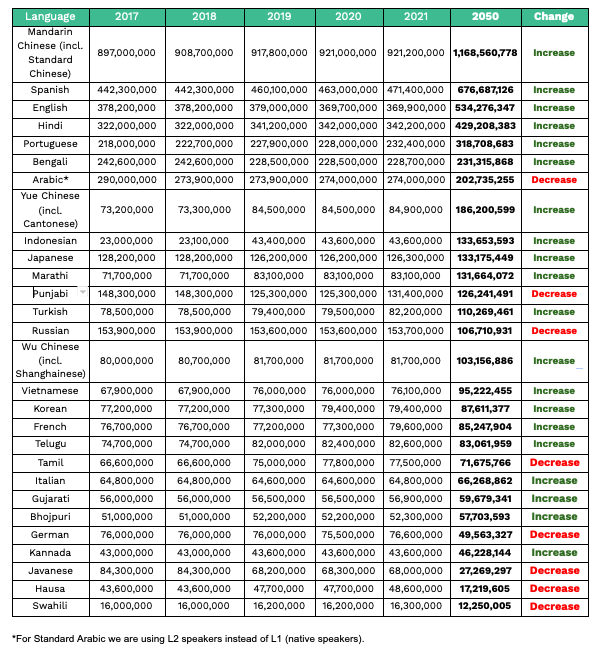 Other Asian languages are set to thrive

Although Mandarin is predicted to dominate by 2050, other Chinese languages are also predicted to thrive over the next three decades. Yue Chinese, a group of languages spoken in Southern China that includes Cantonese, is expected to increase by an outstanding 119% in 2050, and Wu Chinese, spoken primarily in Shanghai and the Zhejiang Province, will also see an increase of 26%.

Almost all major Asian languages will see their numbers grow as a consequence of their high birth rates. One good example of this is Indonesia, the fourth most populous country in the world. According to our study, we expect the number of native speakers of Indonesian to rise by more than 200%. However, plans from the government to convince the population to have fewer children, if effective, could significantly reduce these numbers and alter the trends.

All European languages predicted to increase except German

Those concerned about the future of European languages don’t have to worry because almost all of them will continue to have stable growth. Apart from the high increase in Spanish and English speakers, we will also see a notable rise in the number of Portuguese native speakers (+37%), due mostly to the impressive figures of the Brazilian population (more than 211 million people). However, with Brazil having a decrease in birth rates, our predictions could be affected.

Both French and Italian will grow, but this will be at low rates of +7% and +2%. This is not a surprise considering that Italian is only the official language in Italy, the Ticino canton in southern Switzerland, and San Marino. Its growth will be determined by the limited population growth rates of these countries.

The exception in Europe will be the German language. The number of German native speakers is predicted to significantly reduce in the future (–35%). We’ve seen no growth in the historical figures of native speakers in the last 10 years, and this is because it is only spoken in European countries that have a slow or negative demographic growth: Germany, Austria, Belgium, Liechtenstein, Luxembourg, Switzerland, or the Bolzano area in Italy.

In many of these countries, German is not the only official language but it shares this status with French, Italian, Dutch, or other local languages; which reduces its impact on the actual number of speakers. However, as Germany is the leader of the EU, foreign students may continue to learn German as a second language for professional reasons.

How Can Exercise Improve Your Mental Health: The Biological POV
The Connection Between Your Dental Care and Mental Health
Mental Health in the Construction Industry (Infographic)
Digital Job Training Allows More Time for Work-Life Balance
Why We Should Trust the Synchronicity of Life
Treatable Sleep Disorder Common in People with Thinking and Memory Problems
Measuring the Current State of Patient Pay
Young Orangutans Have Sex-Specific Role Models
Child Mental Health Services Lacking in High-Income Countries, Study Finds
How Having a Well-Balanced Diet Can Help Your Mental Health
New Electronic Notifications Service for Vaccinations Launched This Winter
5 Signs You May Have A Depression Relapse
More Articles
Loading Comments...
Copy link
CopyCopied
Powered by Social Snap