What motivates people (including you)? This age-old question is everlasting due to so many possible and multi-faceted answers.

What’s your first thought in reacting to that question? For many, it’s a pyramid with five coloured layers displaying Abraham Maslow’s hierarchy of human needs.  Physiological needs comprise the base, and self-actualisation is the crowning glory. Introduced in the 1940s and popular by the 60s, Maslow’s theorising remains prominent and respected to this day.

Maslow never used the iconic pyramid to portray his hierarchy. It is not impertinent to use contemporary research (many others’ and mine) to update and revise the pyramid in useful ways that still respect Maslow’s contributions.

The new-look hierarchy, shown in the figure, departs from Maslow’s by highlighting personal agency as the action-oriented, self-guided driver of what people do. It departs also via different motives including, at the pyramid’s peak, human flourishing – subsuming other people’s flourishing as well as one’s own. 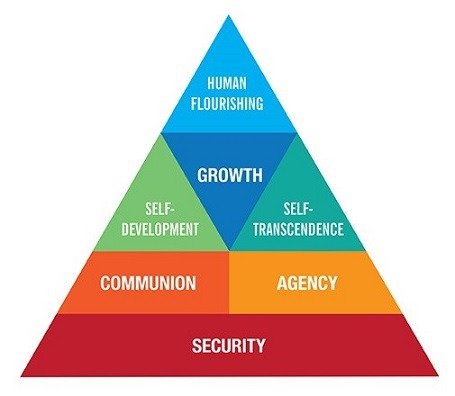 A revised hierarchy of human motives

Security motives anchor the hierarchy at its base, and subsume Maslow’s two lower-order needs. His physiological needs included food and water, and (in modern society) his safety needs cause us to seek indoor living, healthcare, and insurance. Behaviours driven by security motives are quite evident (but not universal) during the COVID-19 pandemic, and will become more so as climate change accelerates.

At the next level up are the complementary motives of communion and agency, the ‘big two’ of social cognition. Communion captures Maslow’s love, belongingness, and social needs, and involves integrating the self in a larger social context. Agency is the desire to expand oneself, achieve, and individuate, and subsumes needs for competence, control, and mastery. It also is a bridge to self-directed, high-leverage action.

Bandura’s social cognitive theory identifies the core belief in personal agency as self-efficacy – confidence in our ability to perform a task or achieve a goal. Efficacy beliefs influence the decisions people make, the goals they choose, the effort and persistence they apply over time, and the courses their lives take. Furthermore, they affect whether, when, and how people pursue the higher-level growth motives: self-development and self-transcendence.

Self-development emphasises strengthening and applying one’s knowledge, talents, and capacities. It captures the primary path to self-actualisation as Maslow described it, and includes personal and professional growth and accomplishment.

Differing from self-development, self-transcendence serves externally-directed motives that benefit other people and causes. Maslow wrote that human potentialities could be individual or collective and even species-wide; he described some but not all of his self-actualised study participants as unselfish people desiring to help the human race. Commensurately, the motive hierarchy identifies self-transcendence as an alternative to self-development – a high-level motive manifested in choices and behaviours that create positive outcomes for others.

Self-development and self-transcendence support and drive growth and flourishing in oneself and others. People can satisfy these (as well as lower-level) motives through naturally-occurring developmental processes, but also via agentic choice and self-determination.

Human flourishing is the pinnacle

In theorising about self-actualisation, Maslow drew from the humanistic psychologists of the time. He also credited Aristotle’s concept of eudaemonia: a higher calling than hedonic happiness in which people pursue and realise their purest and best (virtuous) selves. Flourishing research teaches us much about eudaemonia, elaborating the highest levels of the motive hierarchy.

Human flourishing is ‘a state of complete human well-being’. Flourishing means doing well or being well – self-realised, fully functioning, and purposefully engaged – in:

Each of these indicators is an end in itself, often a means to other ends, and a nearly universal desire.

What may be the most important trait of them all is what Professor Little calls free traits: the flexibility and ability to adapt and deviate from our natural tendencies when circumstances invite it. A prime example is a person labelled an introvert who does well in a presentation or a big social event, even when preferring to be in the audience or at a smaller gathering.

As stressful and uncomfortable our challenges can feel, breaking the confines of one’s dispositions can have eudaemonic effects. Free traits help us grow and flourish in domains that we thought were beyond the bounds of our competence.

Proaction is purposeful and future-focused; forethought being the temporal extension of agency. When people behave proactively, their goals are to create positive change in self or circumstances, with personal benefits to oneself (self-development) or other people (self-transcendence). In combination, this duality generates human flourishing in the broadest and most meaningful sense.

As Maslow applied his psychological theorising to the business world and beyond, he grew frustrated when managers and management scholars ignored his vision of an enlightened and engaged citizenry.

He wrote that a good society is a psychologically healthy one that gives its members the best chances of self-actualising. He would have valued workplaces and communities that:

The test of leadership, Maslow believed, is the effect of policies and actions on people’s behaviour outside of work, in the community. The motive hierarchy emphasises personal agency as a springboard to self-development and self-transcendence, and flourishing for self and others.

As leaders and others help create workplaces and communities in which people thrive, the motive hierarchy will contribute to an even more empowering Maslow legacy.

An earlier version of this article was published on Psychology Today.

Thomas Bateman is Professor Emeritus with the McIntire School of Commerce, University of Virginia.

Psychological Research and Covid: Are a Few Notes Necessary?
Anna Kennedy OBE Is Proud to Colloborate with NHS England Peer Leadership Development Programme
Addictive Behaviours Is a Vicious Cycle to Get Out. These 3 Recovery Strategies Might Help
Mental Health and the Growing Impact of Social Media on Sports
Beth Tyson
On World Radio Day, Cultural Survival Celebrates Historic Win for Indigenous Community Radio
Can Antidepressants Cause Psychosis?
Psychologists Develop New App to Help You ‘Think Smarter’
COVID-19 Lockdown Has Made the Situation Worse for Job Seekers – Here's How We Can Help
Fancy a Break? These Are the Best UK's Areas to Head to for a Wellness Retreat
How to Find Your Own Path to Happiness
7 Natural Ways to Improve Your Mental Health
More Articles
Loading Comments...