Cite This
News Release, (2021, September 23). We Have Mental Health Crisis, So How Can We Spread Awareness and Break the Stigma?. Psychreg on Mental Health. https://www.psychreg.org/mental-health-crisis-spread-awareness-break-stigma/
Reading Time: 2 minutes

As we’ve been forced to isolate, and unable to interact with loved ones in person, mental health is a bigger issue now more than ever. Although there is increased amounts of awareness around this topic to break the stigma, there is still a lot of work to be done.

To look into this topic further, the team at NCC Home Learning carried out a study on suicide rates around the world and the most common mental health issues in the UK.

What is the suicide rate in the UK?

Men account for 16.9 deaths per 100,000 of the UK population. As you can see, men have a much higher suicide rate than women. But why? For a long time, men have been encouraged to not admit they are struggling, when in fact they should see this as a sign of strength.

Countries with the highest suicide rates 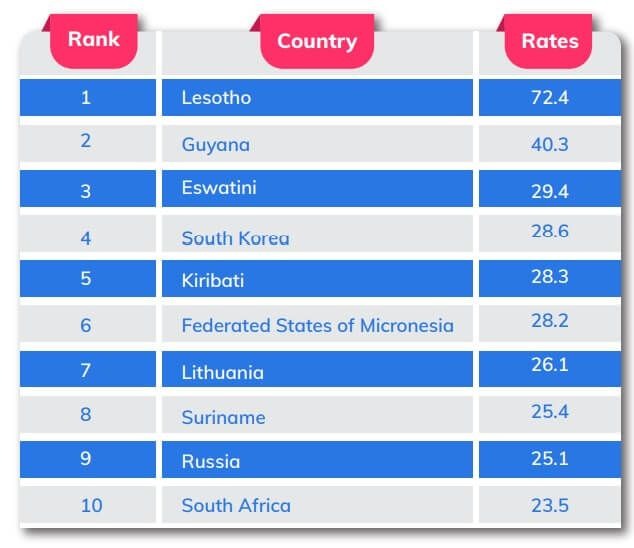 It’s important to remember that less developed countries might not have the facilities and resources to help with suicide prevention. Lesotho, a country in Southern Africa, has the highest suicide rate in the world with 72.4 deaths per 100,000. Other African countries, Guyana and Eswatini fall 2nd and 3rd.

Most common mental health issues in the UK

Data shows that a shocking 20.6% of us suffer from suicidal thoughts, with over 7% of the population reportedly having mixed anxiety and depression, or self-harming. Sadly, there are still many mental illnesses that we don’t talk about enough, such as borderline personality disorder, posttraumatic stress disorder, obsessive-compulsive disorder, bipolar disorder, and many more.

Which groups are most susceptible to suicide or mental health issues? 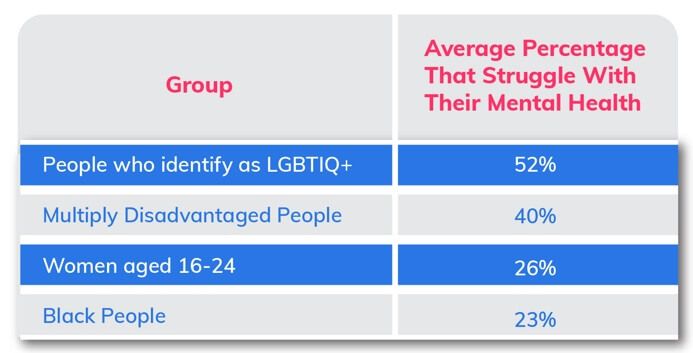 It’s no surprise that groups who face discrimination and social exclusion are more susceptible to mental health issues. Research has discovered that Black people, those in LGBTIQ+ communities, multiply disadvantaged people, and young women are at very high risk of struggling with their mental health.

The main questions to take away from this are: what actions are you taking to spread awareness, and how are you making your mental health a priority?

Psychological Strategies for Coping with Unemployment
Female Hotel Managers: Leadership with Tradition, Sustainability and Feminine Spirit
Manifestation Works, But Not for the Reasons You Think
7 Tips to Boost Your Confidence and Self-Esteem
Playing Video Games as a Child Can Improve Working Memory Years Later
Neuroscientists Posit that Brain Region Is a Key Locus of Learning
What Are the Triggers Affecting Tradespeople’s Mental Health
New Elizabeth Underground Line: How to Deal with the Anxiety of Travelling the Tube
Learning to Minimise Stress Through Creating Healthy Coping Mechanisms
Which Age Group Are Most Likely to Be Addicted to Video Games? The Results Might Surprise You
From Being Behind Bars to Steering Youth Away from Them: Reformed Prisoner Music Project Gives Hope ...
How to Prepare for a Career in Counselling
More Articles
Loading Comments...