3,367 children and young people were surveyed in 2017 and again in February–March 2021, and the differences in their mental health are frightening to see.

Most concerning for drug and alcohol experts at the UK Addiction Treatment Group – who analysed today’s NHS report- are the differences and rises in rates of drug use among children with probable mental disorders.

The report shows that young people with a possible mental illness were more likely to have smoked cigarettes (23.7%) or used cannabis or other drugs (16.5%) than those unlikely to have a mental disorder (9.3% and 5.2%, respectively), strengthening the connection between ill mental health and substance misuse. 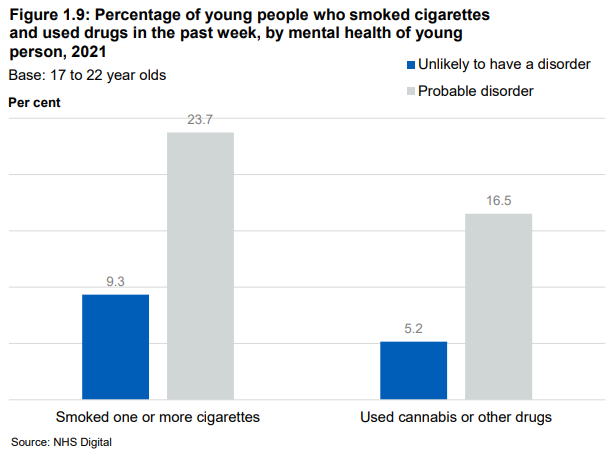 Nuno Albuquerque, head of Treatment at the UK Addiction Treatment Group, comments: ‘We’re grateful to the NHS for completing the follow-up to their 2017 survey at such a difficult and demanding time because today’s report should stand as hard evidence that mental health in our young generation should be at the top of our Government’s health agenda.’

‘It’s here in black and white that a lot of children and young people are suffering. Our immediate concern is that those with probable mental health disorders are three times as likely to use cannabis and other drugs. Using drugs is a coping mechanism; these kids are trying to cope with their underlying problems because they’re not being helped in any other way. This needs to stop because, as we see first hand every day, early development of substance misuse is extremely dangerous, and ultimately the child ends up in a vicious cycle.’

NHS report also shines a light on the COVID-19 context to the mental health of children and young people.

It reveals that in 2021, 12.8% of 6–16-year-olds with a probable mental disorder lived in households that had fallen behind with bills, rent or mortgage during the pandemic, and 9.1% had become more likely to be unable to afford to buy food or had used a food bank. This compares with 6.7% and 2.8% respectively of those unlikely to have a mental disorder.

Concerningly, in 2021,16.7% of 11–16-year-olds using social media agreed that the number of likes, comments and shares they received impacted their mood, and a half (50.7%) agreed that they spent more time on social media than they meant to. Girls were more likely to agree with both statements than boys.

Nuno concludes: ‘The COVID-crisis has without a doubt had an impact on the mental health of our younger generation. It’s saddening to see how much importance children– especially girls- place on social media gratification, as this can negatively affect their mood, sleep, and even their relationship with food.’

Free information and guidance on mental health for young people and children is available.

Benefits of 'Sober October' and Taking Regular Breaks from Alcohol
MPM+ Has Been Awarded Physis Recovery’s Global Media Account
Photobiomodulation Can Help Slow Down Alzheimer’s Disease, According to New Research
Latest Research Explores Ways on How to Transform Treatments for Parkinson’s Disease
Autism – Where Does One Begin?
You Can Remember More by Taking Breaks
7 Steps for Making a Life Plan
Social, Environmental, and Behavioural Factors Influencing Children's Mental Health
Psychological Films (and Series) to Binge-Watch this Quarantine
How Obsessive and Persistent Thoughts Affect Those Who Suffer From Depression and Anxiety
Why It Is So Important to Regularly Measure Our Mental Health
No, Not All Whites Are Racists
More Articles