Jealousy is an intruder in many relationships and upsets the balance between a couple. But beware, this feeling that applies to both women and men is not reserved just for faithful spouses. According to the latest study by Gleeden, the European leader in extramarital encounters with nearly 4 million members, the unfaithful are also very jealous.

It is hard to imagine an intimate relationship totally devoid of jealousy. According to a study by Statista, 57% of French people are jealous, be it in a controlled, moderate, or obsessive way. But what about the unfaithful? Those who allow themselves a little bit of mischief from time to time should be the first to tolerate it from their partner. Not at all, it would seem. The unfaithful are just as jealous as the rest, or even more so. 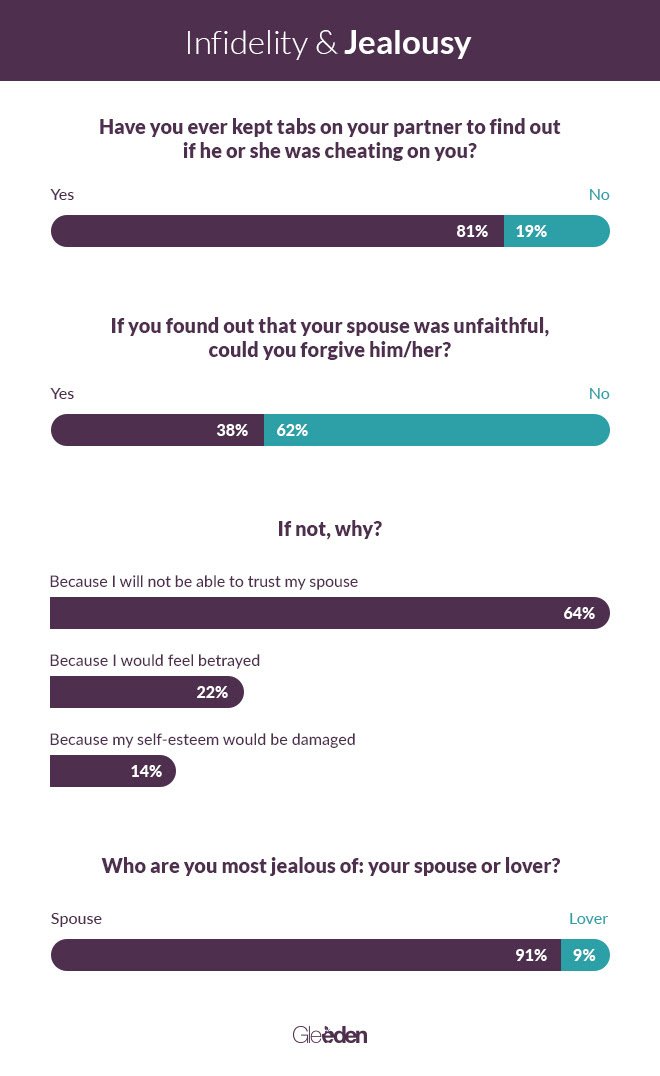 Being unfaithful is hard to forgive – even for the unfaithful

Out of more than 8,000 unfaithful members interviewed by Gleeden, 81% admit having already kept tabs on their partner to find out if he was having an affair and 62% say they could not forgive their spouse’s infidelity. A situation which is paradoxical at the very least, but not that surprising, according to psychoanalyst Alain Krotenberg. Indeed, jealousy would actually be ‘a reflection of the unconscious desire to deceive the other’. So, being well aware of the desires and temptations which affect us all, the unfaithful would be all the more suspicious and jealous of their spouses.

As for how they view infidelity, the unfaithful are no more tolerant than others either. More than half of Gleeden members say they would no longer be able to trust their spouse if they were unfaithful (54%) and nearly a quarter said they would feel betrayed (21%). Finally, 14% of the unfaithful interviewed confess that their self-esteem would be too damaged to forgive their spouse’s misconduct. Couples have one rule to follow: ‘Do as I say, do not do as I do.’

This Could Be the Most Important Personality Trait – Really
How Refugees Transition from Fighting War to Fighting PTSD
An Informative Guide on Treating Bipolar Disorders: By Recovery Experts
‘I Hated Myself Completely’: Brave Student Speaks About Body Image Struggles
1-Minute Exposure to Monochromatic Light Modifies Neural Connections
Novel Anti-Craving Mechanism Discovered to Treat Cocaine Relapse
3 Ways to Handle Age-Related Anxiety
Dr Mark Hoelterhoff
How Can an Emotional Support Animal Help You Live a More Fulfilled Life
The Happy Colours of the Sky Makes Me Feel at Peace
5 Ways to Promote Mental Health in the Workplace
My Mental Health Story: Why I am Worried About Getting on a Bus
More Articles
Loading Comments...