Speaking a foreign language is a real seduction asset. And a simple ‘ma che bella!‘ or ‘mon amour‘ may be enough to make our heads spin. As part of a European study on infidelity, the Gleeden extramarital dating site interviewed more than 3,000 members in England to know the languages ​​that make them succumb to temptation. Discover the top five favourite accents of British unfaithful men and women.

Would it be so hard to resist a beautiful foreign accent? Apparently yes. According to a study commissioned by Babbel (a mobile app), 71% of Americans think that a person who speaks several languages ​​is more appealing. To learn more, Gleeden interviewed its members to know the languages ​​that particularly captivate them.

At the top of this ranking for the sexiest foreign accent as judged by British cheaters is: Italian. Overwhelmingly selected by the majority of Gleeden members interviewed (29%), the language is appealing with its melodious and romantic accent.

And unfaithful Italians returned the favour since the English accent is approved by more than a quarter of them (26%). The Spanish accent takes third place. The language with warm intonations appeals to 17% of respondents. German and Swedish close this ranking of favourite accents of British unfaithful men and women with respectively 13% and 11% of votes. 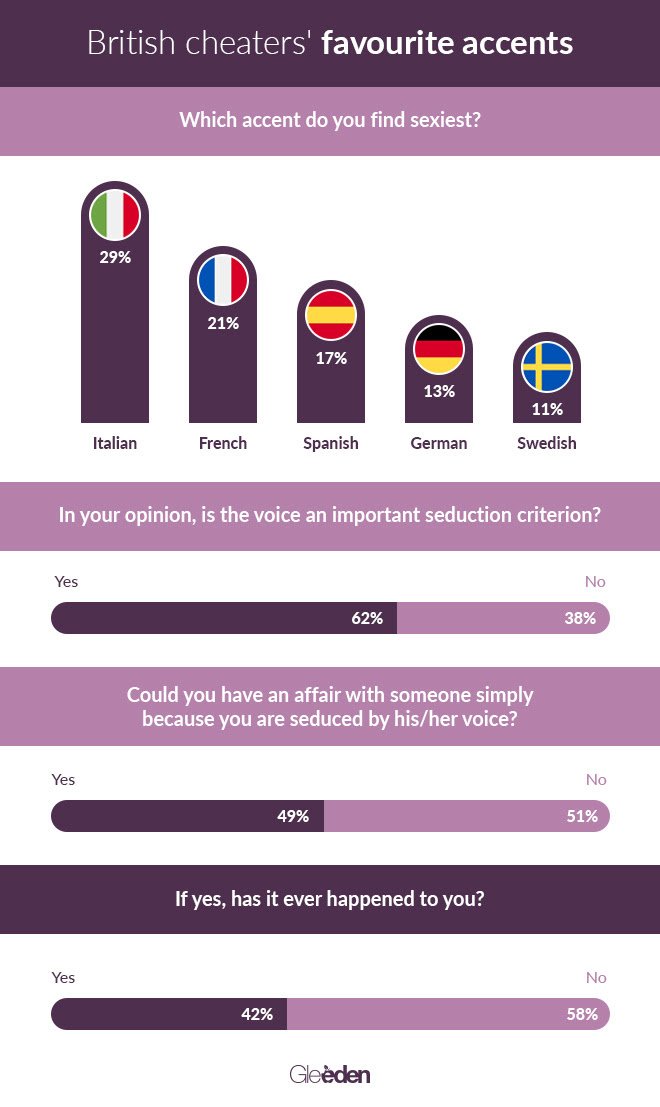 The voice, characteristic of all temptations

While some are charmed by a nice look, a smile, beautiful hands or a nice neckline, the voice for others, apparently makes all the difference. Thus, 62% of unfaithful English men and women interviewed by Gleeden believe that the voice is a major seduction criterion.

Nearly half of them (49%) say they could have an affair simply because they are seduced by a beautiful tone of voice. Finally, 42% of them admit having already had an extra-marital relationship with someone simply because they were charmed by his voice.

Forget about ultra-elaborate makeup or well-trimmed beard, a sweet and enchanting voice that’s the real secret.

New Study Sheds Light on Lives of People with Parkinson’s and Their Carers
We Have to Tackle Men's Mental Health
The Secret Lessons That Can Wreck Your Life
Covid Could Reshape Mental Health Treatment
Childhood Dream Jobs in 2022: Over a Quarter of Kids in the US Want to Work in Healthcare
Here's Why Psychological Safety in the Workplace Is Important – And How to Foster It
Psychological Impact of Traumatic Injuries
Research Reveals Long-Term Positive Impact and Cost Effectiveness of Tailored Group Exercise for Old...
Prince Philip: While There's Life, There's Hope
New Study Offers Neurological Explanation for How Brains Bias Partisans Against New Information
What Is Text Therapy?
Let's Continue to March Ahead
More Articles
Loading Comments...