Researchers have been investigating resilience for around 50 years. However, there have been a number of limitations with this research. For example, although we usually talk about resilience as an ability to withstand stress, most researchers have not actually investigated their proposed resilience factors in relation to stress. Instead, they have simply measured their factor directly in relation to an outcome they’re interested in. For example, they have measured perceptions of social support in relation to well-being. They have found that high social support is linked with higher well-being like this:

However, if you think about it, the opposite of perceived social support is loneliness. And indeed, a number of researchers have previously shown us that feelings of loneliness are linked with indicators of poorer well-being, like this:

As you can see, this kind of ‘resilience’ research is not really telling us anything more than we used to learn from studies of risk factors.

So, can resilience research tell us anything new?

Yes. However, we have to research it in the same way that we talk about: we need to study which variables reduce the likelihood that exposure to stressors will lead to negative outcomes. If we draw this out, it would look like this:

To provide researchers with a guide for doing this kind of research, and to clarify the criteria that a variable should meet in order to be considered as conferring resilience, I have gathered these ideas together in a framework called The Bi-Dimensional Framework (BDF) for resilience research.

What advantages does the BDF offer resilience researchers?

It overcomes the confusion caused by the range of terms that have been used to describe ‘resilience’. There have been a lot of words used in the research literature to describe resilience, these include ‘mental toughness’, ‘hardiness’ and ‘psychological resilience’, among others. As you could probably tell, this can be confusing. However, the BDF defines resilience according to methodological criteria (i.e., what a variables does, or how it behaves), rather than terminology.

It suggests that resilience factors are psychological variables which buffer the association between stress exposure (or exposure to risk factors) and the likelihood of negative outcomes. In particular, the BDF states that for low resilience individuals, there should be a clear increase in negative outcomes in relation to the amount of stress they experience. However, for high resilience individuals, there should be minimal increase in negative outcomes, no matter how much stress they experience. If we were to draw this relationship out, it would look like this: 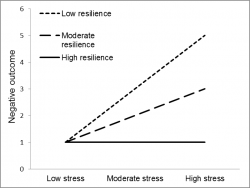 This points to a need for concepts of resilience which can be developed and adapted in response to research. As a framework for resilience research, the BDF allows for this kind of growth and development. In particular, it enables the systematic review of individual studies which have investigated factors which buffer the relationship between stress exposure and negative outcomes.

What do these reviews tell us?

Together with my collaborators, I have conducted systematic reviews of resilience factors using the BDF approach, both of which have been published in a leading psychology journal. The first of these investigated psychological variables which buffer the relationship between exposure to any risk factor and suicidal thoughts. This suggested that hope, flexible thinking, self-confidence and a good way of looking at events conferred resilience.

The second investigated psychological variables which buffer the relationship between exposure to failure experiences and psychological distress. This found that mental flexibility, higher self-esteem and a positive way of explaining events confer resilience to distress in response to failure.

Together, these reviews suggests that even if you look at different kinds of negative outcomes, similar variables seem to confer resilience. These variables relate to mental flexibility, self-confidence and self-esteem, and a positive way of positive way of explaining events.

Can we train people to be more resilient?

Yes, we think so. The factors identified by these reviews (mental flexibility, self-esteem and self confidence and explanatory style) are those which are commonly targeted in cognitive-behaviour therapy, which is an evidence-based form of psychological therapy. CBT was initially developed as an intervention for people with mental health problems, but has since been found to be effective for improving mental well-being in a range of populations.

With a collaborator in Australia, Dr Reema Harrison, I have been developing an intervention plan for training medical students in resilience which draws on CBT. This intervention is designed to train participants in resilience through three 60-minute workshops based on the principles of cognitive-behaviour therapy. These workshops will involve psychoeducation, experiential exercises and group work.

Judith Johnson, PhD is a clinical psychologist who is based at both the Institute of Psychological Sciences of the University of Leeds, and the Bradford Institute of Health Research.

Pitchup Reveals 20 Best Campsites for Mental Well-Being
New Survey Reveals Feelings Towards Life in Lockdown of People with Addiction
If You Love Yourself, You'll Love This Doll – Why the Doll Tests Don't Make Sense
5 Steps to Stop Getting Distracted and Not Let Them Take You Over
Elections Cause the Stress Hormone to Increase
Things to Consider to Get Rid of Alcohol and Drug Abuse
What Can You Do if Your Life Is in the Grey Area?
How Can We Ensure That the Metaverse Is Free, Open, and Safe?
Why Do We Help Others? The Morality Preference Hypothesis
Solitude vs Loneliness: Why Are They not the Same?
Life After Lockdown – Mental Health Charity CEO Issues Warning
ADHD Linked to Hoarding Behaviour, Says New Study
More Articles
Loading Comments...