Drugs are often used in the British party scene, in order to enhance the effects of alcohol. According to recent reports, the UK’s attitude towards using drugs has meant that as a country ‘we take more drugs than anywhere else in the world.


But where in the UK has the most toxic drug culture?


As part of a new study, the data specialists at Private Rehab Clinic Delamere, have analysed a number of different factors including the number of people per city who have experimented with drugs, the number of drug poisonings, the number of searches per month for drug rehabilitation and more, to reveal which areas of the UK had the worst attitude towards drug culture.

Despite having a larger population it wasn’t London that took the top place on the list. In fact, coming in the first place was the Midlands city Birmingham.

The city scored a disappointing 6.1/50 overall, thanks to a massive 10,525 people in the city who had experimented with opiates and crack cocaine in their lifetime. The city also received a worrying mark because of its 81 drug-related deaths.

Coming in second place on the list was Leeds, with an overall score of 7.8/50. When it came to recorded numbers of drug poisonings, 78 cases were found, as well as 300 searches per month for drug rehabilitation. 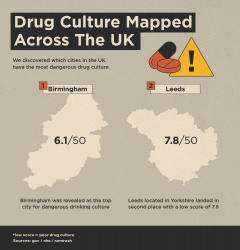 A statement from Saint Francis Hospice's CEO: Pam Court
Self-Care for Carers
3 Best Natural Remedies to Treat Insomnia
Actively Preparing or Watching Others Prepare Food Can Lead to Eating More
Asia’s First Trauma-Informed Addiction Treatment Programme Launched in Thailand
What Is the Difference Between Panic Attack and Panic Disorder
Why Adolescence Is the Period of Developing Romantic Relationships
Critical Social Justice Is More Likely to Lead to Division and Victimhood Than to Equality
Jason Kulpa, Founder of The Kulpa Foundation Suggests Ideas on How to Attract and Retain Volunteers
Confused About the Car Accident Insurance Claims Process? Here's A Brief Guide
Here's How Yoga Therapy Can Help to Overcome Panic Attacks
7 Tips to Boost Your Confidence and Self-Esteem
Trains in the Brain: Scientists Uncover Switching System Used in Information Processing and Memory
How Time Off Benefits Your Mental Health
Teenage Drug Addiction Statistics
How to Know if You Have Spring Allergies
Parul Kalia, PhD
Q&A: On the Path of Justice for People Living with AIDS
What People Actually Think of Me
Pain Management Programmes Key to Tackling Chronic Pain Epidemic
More Articles
Loading Comments...