The construction industry knows it has a problem. Working in the building and construction trades has become the US’s deadliest occupation. But it isn’t cranes or ladders nor bad backs or broken bones that get construction workers to sign off. They are more likely to die by their own hands rather than be killed in an on-the-job accident. With 53.2 suicides per 100 thousand workers, construction has among the greatest suicide rate of any industry, according to Centers for Disease Control. This suicide rate is over four times higher than the national suicide average and five times higher than all construction deaths combined.

The construction industry as a whole needs to improve mental health awareness and assistance, but this can only be done on one jobsite at a time. 10th October is the World Mental Health Day 2021 – a time to exchange information and resources and reach out to those affected by mental health issues.

Workwear Guru joins the call to raise awareness and spread hope to prevent suicides. They did this by interviewing several mental health experts, statisticians and health & safety professionals who deem suicide prevention a sine qua non in the employee health and wellness efforts. The aim of their study is to educate and encourage all stakeholders to use all the resources available, familiarise themselves with the problem and better implement suicide prevention strategies.

Suicide rates vary by industry and occupation, with certain groups within these categories suffering greater rates than the overall population.

The following is a list of occupations thought to have the highest suicide rates. Much of this material is based on information given by the Centers for Disease Control and Prevention (CDC): 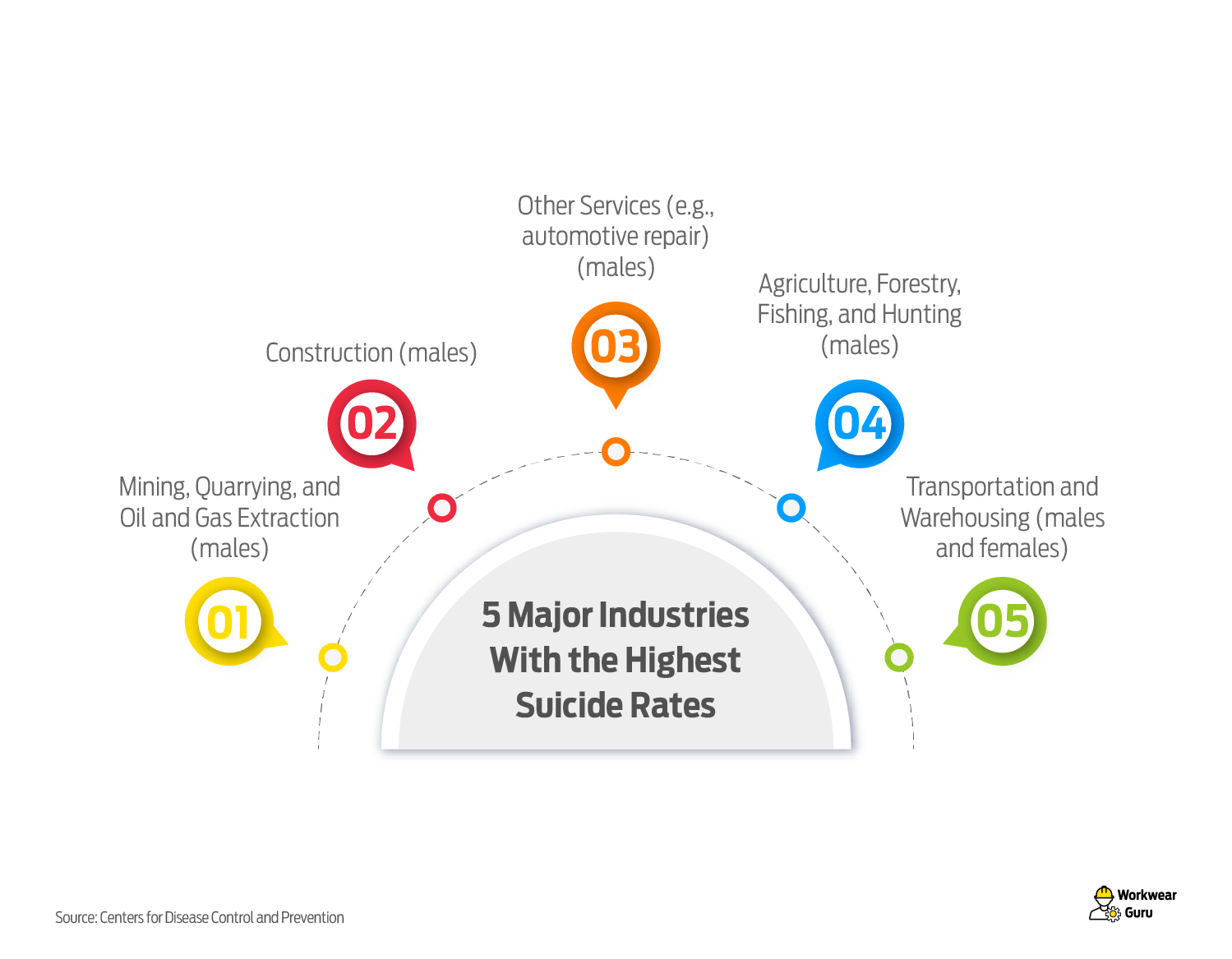 At the same time, CDC calculated the suicide rates for six major occupational groups, placing Construction and Extraction occupations at the top:

Working in the building and construction industry is a demanding profession. There are tremendous production expectations on the workers in order to fulfill deadlines, as well as working circumstances that may frequently be hazardous if rigorous safety rules are not followed. The Centers for Disease Control and Prevention (CDC) reports that male workers that work in construction have a 65% higher rate than all U.S male workers. According to the same report, there are various work-related risk factors that are taking their toll on the construction workers in the worst way imaginable.

While further study is required to understand these work-related factors, CDC indicates that suicide risk is related with the following:

While the death by suicide puts an emotional toll in the families of the affected, it has a substantial effect in the economy, affecting the government, employers and the decease’s family.

Here are research data and notes by experts telling why the suicide rates are high among construction workers and what construction companies can do to tamper the suicide among their employees.

Factors that lead to higher risks for suicide

Construction is one of the industries with the highest work-related fatalities due to safety risks in the workplace. However, suicide (and mental health problems) comes after that, affecting thousands of construction workers every year.

According to Kirk Bol, a vital statistician at Colorado Center for Health and Environmental Data, male suicide decedents within the industry were less likely to be diagnosed and treated for mental health problems. The lack of treatment for mental health issues minimises the chance to prevent suicide among the workers.

According to experts, a high work-pressure environment, work at remote locations, tough guy mentality, and opioids dependency are the main factors putting construction workers at risk for suicide.

Mental health issues arise as the construction industry operates on strict deadlines. Such a schedule can put pressure on the workers. When workers don’t meet the deadline, they can be subject to fines.

Besides, construction is a high-stress environment with complications of different nature happening every day. When you add together the pressure from the management and the workplace complications, you find construction workers jeopardizing their health and working longer hours to conform to deadlines, budget, and quality expectations.

Work-related stress is not an isolated event. Instead, it built over time, placing the construction workers at risk of mental health problems that lead to suicide.

All these factors can build up contributing to mental health problems. If they are left undiagnosed, it increases their chances of suicide.

Construction often requires work in remote locations. The transfer to distant locations means living in hotels, which can be a lonely experience.

This means, atop a high-pressure environment where they work, workers spend the rest of the days away from family and friends, distancing them from their main support system. The separation from the family creates the space for the family to move without you, leading to marriage and parenting problems, said Sally Spencer-Thomas, PhD, an impact entrepreneur


‘Mental health or substance abuse challenges may be more likely to go unnoticed or unaddressed in situations like this,’ added Amanda McGough PhD, licensed psychologist at BASE Cognitive Behavioral.

As construction is a male-dominated industry with workers mainly from low educational backgrounds, masculinity prevents them from acknowledging their mental health problems. As the ‘tough guy’ taboo prevails in their work environment, openness is not appreciated, and ‘many in the field may be afraid of appearing “weak” if they acknowledge a struggle,’ says McGough.

Moreover, the stoicism and fearlessness they show can lead to impulsive risk-taking and destructive behaviours, says Spencer-Thomas.

Besides, years of hard physical labor manifests with chronic pain. As a result, a large number of construction workers take opiates as painkillers for their work-related injuries. A study from Midwest Economic Policy Institute found that a high injury rate places them at risk of forming opioid dependency, quickly leading to an overdose. The same research found that 15% of construction workers battle opioid abuse.

Opioid abuse escalates quickly, leading to overdose deaths. The Massachusetts Department of Public Health report showed that 26 percent of opioid-related overdose deaths came from construction and extraction. It translates to about 106 deaths per 100,000 workers which is six times higher than the average rate of Massachusetts populations. 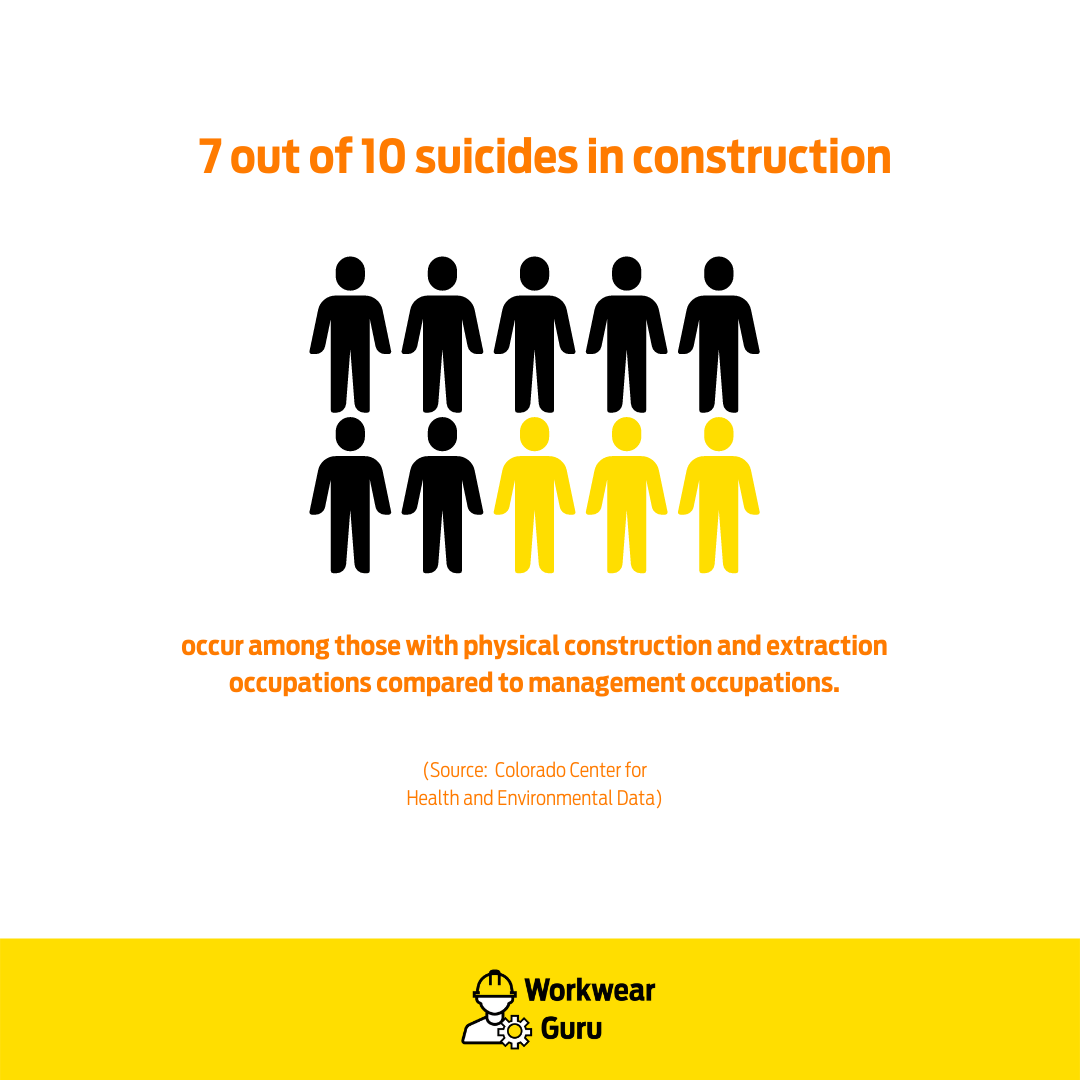 The economic burden of suicide in construction industry

Apart from the moral, emotional, and psychological burden suicides leave to family members and friends, it also takes a significant toll on the economy.

On the economic aspect, suicide adds to a high cost charged at employers, governments, and workers themselves. The employers with a worker that dies by suicide bear a financial debt, covering production disturbance costs, human capital costs, medical costs, administrative costs, and other costs.

The Centre for Mental Health states we lose 91 million days each year to mental health issues. The burden of the costs goes mainly to the employer. While mental health problems are a burden for the economy, suicide puts the problem to another level.

World Health Organization shows the severity of the problem, adding that for every team member dying from suicide, 10-20 others are attempting. For employers, it means they have to pay for the recovery costs of employees that attempt suicide.

At the state level, the costs can reach high levels. In 2001 in Ireland, the cost of suicide came close to 1 billion US dollars. The same study showed that in 2012, the suicides in the South Australian Construction Industry were valued at $57.34 million, with over 98% covered by the government.

Moreover, opioid abuse among construction workers creates a financial burden for employers. Researchers found out that healthcare expenses, absenteeism, and turnover costs about $6,800 per year. In contrast, a recovered construction worker saves his company close to $2,400 in a year. The cost reduction comes mainly from lower medical expenses and fewer missed working days.

What can employers do to prevent suicides among construction workers

As construction is a male-dominated industry, the expression of depression and suicidal thoughts continues to be a taboo subject. Breaking the taboo is the most effective way to deal with mental health issues in the workplace.

Greg Sizemore, vice president of Health, Safety, Environment, and Workforce Development at Associated Builders and Contractors, said every organisation needs to build a culture of openness in dealing with mental health, suicide, and addiction. ‘The culture must create the conditions that foster openness to speak out and up and must equip and empower all employees with the personal skills they need to feel comfortable speaking up or seeking assistance,’ added Sizemore.

‘The goal of any workplace suicide prevention programme should be to increase mental wellness and resilience and reduce toxic job strain and under-addressed mental health concerns through a focus on upstream, midstream, and downstream approach,’ notes Spencer-Thomas.

Emerging Technologies That Can Help Autistic Children
High Morale in Low Times: What Works Best to Keep Our Spirits High?
Freemasons Support Over a Million People with Mental Health Issues
Zohreh Rahimi
Melanie Timberlake Speaks at Women's Radio Station
Everyone Needs to Promote Mental Health Awareness
We Talked About Celebrating Neurodiversity at Women's Radio Station
Both of My Sons Have Autism – Raising Autistic Children and Adults Is Very Demanding
Can You Solve This Brainteaser in 30 Seconds (Before the House Sets on Fire)?
Women Who Love Sports Don’t Necessarily Attend More Games, According to New Study
Genetically Determined Levels of Inflammation Linked to Neuropsychiatric Illness
'Borderline': A Memoir of Borderline Personality Disorder and Survival
More Articles
Loading Comments...