For a week, sport has been at the heart of every conversation. And with good reason. It is official, the city of Paris will host the Olympic Games in 2024. Which gives Gleeden, the European leader for extramarital encounters with almost 3.7 million members, the opportunity to take a look at in the sports activities of its members. Which sports are practised most by the unfaithful? Find out the answers from over 15,000 Gleeden members.

Women maintain their seductive capital and opt for gentler sports to take care of their figures. Yoga takes first place in the women’s ranking, practised by 29% of unfaithful women, followed by fitness (23%) and then pilates (16%). Flexibility, softness and tone seem to be the most important for Gleeden’s female members – Popular among the unfaithful, running rates in both rankings and is practised by 14% of the women interviewed. Finally, swimming takes the last place in the top 5 feminine sports, and is practised by 9% of women. 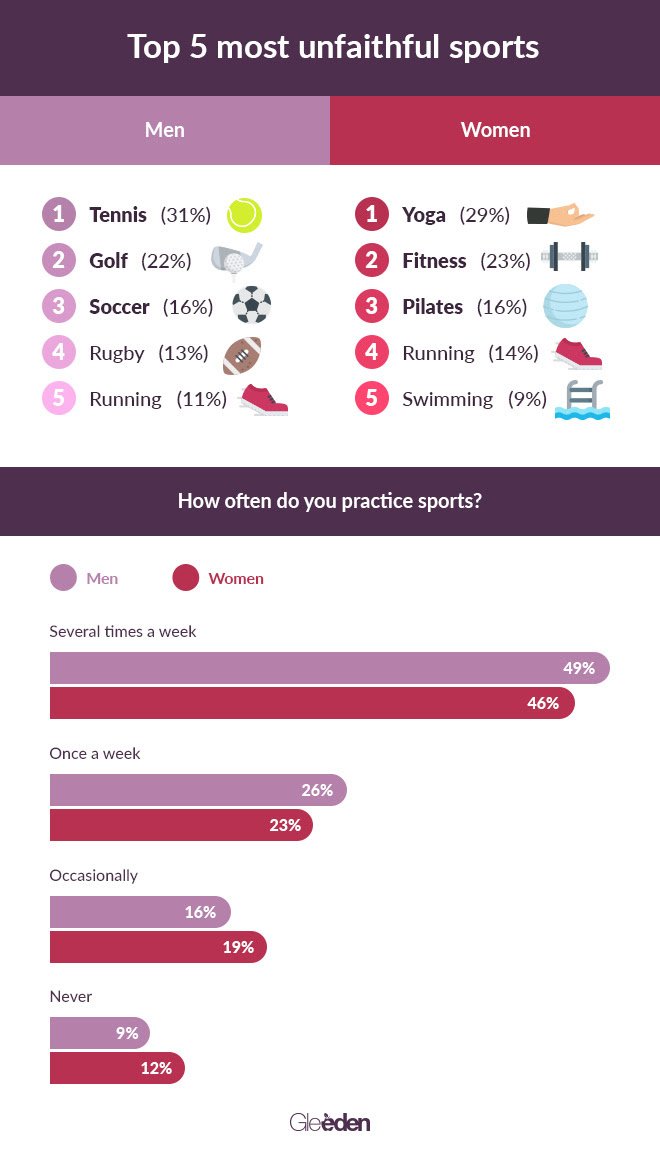 To maintain a lasting extramarital relationship, it is better to have energy to spare and be in good physical shape. And Gleeden members seem to have understood this, because they train like true athletes: 49% of men and 46% of women interviewed by Gleeden say they do sports several times a week, while only 9% of men and 12% of women admit that they don’t.

Sport: the favourite alibi for infidelity

But there is another reason for the attraction for the unfaithful to sports. Yes, according to a recent study by Gleeden, sport is one of the most common alibis used by the unfaithful to find their lovers. It was revealed that 10% of Gleeden members admit they have taken a gym membership with the sole purpose of using it as an alibi. No wonder then that the idea ended up by driving some of them to decide to do sports regularly.

Obviously, sport and infidelity is a great love story.

Expert Shares Tips for Choosing the Right Multivitamins
Our Eyes and Brain Work Together to Create a ‘Pipeline’ of Meaning – New Study
How Rugby is Helping to Reform Offenders in the UK
How Divorce Can Affect Your Mental Health
How Can Dogs Help Our Mental Health?
Everything You Need to Know About In-Patient Treatment at Rehab Centres
US Embassy in Latvia donates EpiShuttles to State Emergency Medical Services
Early Neural Activity Associated with Autism
What Is Death?
CBD Gifts from TRIP for Anyone Who Needs to Relax This Christmas
Personal Trainer Sunnyvale: The Best Guide for a Personalised Fitness Journey
Social Media: The Bad and the Good of Your Online Footprint
Brainwaves May Predict and Potentially Prevent Post-Injury Epilepsy
How Effective Is ABA Therapy for Treating Kids with Autism and ASD?
Reasons Why We Should Be Talking About Suicide
The Happy Colours of the Sky Makes Me Feel at Peace
Other Ways to Say Thank You to Employees Even During Cancelled Christmas Party
New Study Shows Neuroplasticity 'Brain Retraining' Programme Is an Effective Treatment for Fibromyal...
Survey Reveals 60% of Brits Worry About Leaving Their Home When They Go on Holiday
8 Facts About Tea You Didn’t Know
More Articles
Loading Comments...