Binge drinking is often an accepted part of British culture.  In fact, a 2017 survey revealed that 27% of people in the UK were considered to be a binge drinker.

But where in the UK has the most toxic drinking culture?

A new study from the team at Private Rehab Clinic Delamere has revealed the locations around the UK that are thought to have the worst drinking culture, based on a number of factors including, the number of alcohol deaths, average alcohol consumption and more.

The research revealed that London had the most dangerous drinking culture in the UK with an overall score of 0 out of a possible 80.

As the most populated city in the country, London had a huge 26,580 alcohol-related hospital admissions recorded between 2019-2020, 190 bottomless drinking locations and 1,068 bars and nightclubs that all contributed to its toxic drinking culture.

Taking second place on the list was Leeds, with a score of 11 out of 80. Their bottomless drinks score was 0.8/10, with 60 recorded locations and events offering free-flowing booze. 3,310 hospital admissions were documented between 2019–20 and finally, there were 9,954 recorded alcohol dependency cases between 2018–19. 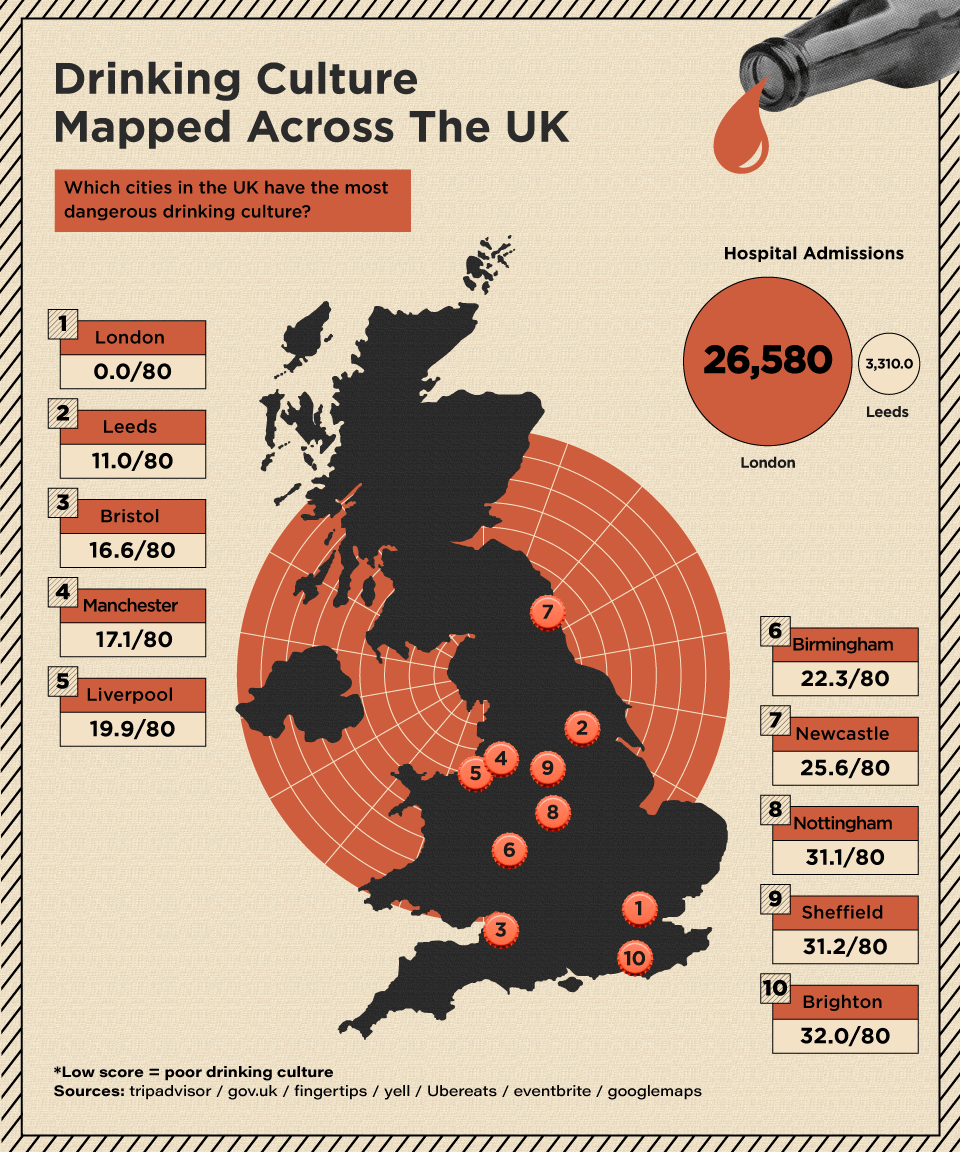 Completing the top three was Bristol with a score of 16.6 out of a possible 80.

Taking a seed list of the most popular countries in Europe, researchers have uncovered which are at risk of dangerous drinking culture, by analysing specific factors

Mental Health Story: How to Deal When Your Case Manager Resigns
How to Naturally Support Digestion? Healthy Gut, Healthy You!
LifestyleGarden: Now Is the Time for Change
Experts Reveal How to Ease Bank Holiday Hangxiety with CBD
Boundaries Without Guilt – Striking the Right Balance in Life
Understanding and Improving Seniors' Mental Health
'Universal Law of Touch' Will Enable New Advances in Virtual Reality
Understanding the Power of Language
Mental Health Charity Mind Receives £250,000 From Freemasons During COVID-19 Crisis
Researchers Propose 'Leapfrog Design' for More Efficient Ways to Develop and Improve Mental Health I...
Researchers Invited to Apply for £20,000 Grant to Fund Mental Health Research Project
Well-Being in Schools and a Dog Called Moose
Adoption UK Responds to the Case for Change Report
Early Signs of Mental Health Problems in Students
Book In-Home Care Services to Offer Undivided Attention to the Elderlies
Brain Microstructural Damage Related to Cognitive Dysfunction and Steroid Medication in Lupus Patien...
Fegans Backs 'The Parents Promise' to Put Children First When Separating or Divorcing
New Research Finds Links Between Parkinson's Disease and Neuroticism
The Health Czar Might Be the Final Solution to the Mental Health Crisis in Modernity
Getting Away From It All
More Articles
Loading Comments...