At first glance, the debut novel by writer and broadcaster Russ Kane entitled The Gatekeeper, could be seen as a supernatural horror story. However, the book is far more layered and nuanced than that. Yes, it is frightening, but it is also very funny, dark, mysterious and intriguing.

So what has this newly published novel has to do with well-being and mental health? The answer is, surprisingly, a lot.

The outline plot is that every 20 years, the Gates of Hell open and Lucifer and his hordes attempt to overrun the Earth. To counteract this potential Armageddon, one person on the planet is randomly, and celestially, chosen to be ‘The Gatekeeper’ and must endeavour to close the Gates. Some years they succeed, sometimes they fail. They have no choice. This time the task falls to a jaded, cynical, often worse-for-wear TV presenter called Nick Gold who presents a ludicrous ghost-hunting programme, ‘Nick Gold – Paranormal Detective’. Nick despises the series, but after five years, has learned that the income is essential to fuel his dissolute lifestyle.

Nick is presented as a flawed human being. A true anti-hero. He drinks far too much. He has lost any religious belief, despite studying theology at Oxford, his girlfriend has mysteriously died and he is riddled with guilt, angst and considerable self-loathing. It is Nick’s journey, his spiritual awakening, his personal sacrifices that engage the reader, intertwined with a fast-moving plot that moves across several continents.

Nick’s mental health, at a nadir when his girlfriend dies, gradually becomes stronger. We watch as he grows in stature as a hugely valuable member of society and as a man. Bit by bit, the bitter cynicism that has haunted him throughout his life is chipped away until he has to face the monumental fact that everything he believed in was, in fact, false.

One question that author Russ Kane poses here among the mystery and mayhem is do we need faith? Is having a belief system a key factor in achieving well-being? Another is, how much would you sacrifice to ‘do the right thing’? 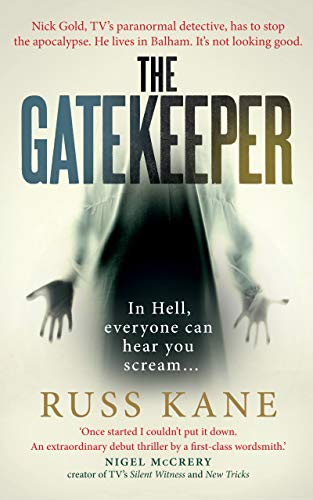 Nick, and the hard-bitten American lawyer that he meets, Lesley-Ann Trobe, are the products of our age. They believe in nothing. The lawyer takes on a particularly hopeless case not to pursue justice, but simply, and openly, for the money. Nick, for his part, continues to make television programmes that inwardly he loathes, again for pure financial gain. They are both nihilists, bruised and battered by the lives they have led. It is only when they are faced with the seemingly impossible series of events that they encounter around the world that they begin to attain their true potential.

It is a parable of redemption, sacrifice and ultimately the power of love. How greatness can be achieved from very humble beginnings. How the quest for material things can be replaced by the quest for honesty and truth. Some have said that rather than a supernatural horror story, The Gatekeeper is a deeply religious tale of sacrifice and redemption. As with any work of fiction, the text is open to many interpretations. Is it a parable of modern times? Certainly, the novel demonstrates how technology has changed our world in ways its inventors had never dreamed of. How we are all slaves to the endless onslaught of multiplatform media messages and how this directly affects our well-being. The phone, once a genteel way of conducting a conversation, is now the very centre of our lives, controlling us instead of us using it as a tool for which it was intended. How, in many ways, we have become like The Matrix, constantly plugged-in to a central core. If you disagree, just use public transport or walk down the street and see for yourselves.

At face value, Russ Kane’s debut novel is a fast-paced, graphic, darkly funny supernatural thriller. Underneath it would appear to address many of the core issues that mankind struggles with today more than ever. Who are we? Why are we here? Who should we believe in? What are we, as individuals, prepared to do to make the world a better, safer place?

Dennis Relojo-Howell is the founder of Psychreg. He is also the editor-in-chief of Psychreg Journal Psychology, and writes a weekly column for Free Malaysia Today.