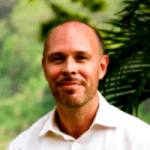 Alastair Mordey is a certified and accredited addiction counsellor with over 15 years of experience. Over the years Alastair has worked in the entire range of settings from street outreach and frontline services to the management of residential units. In 2010, Alastair moved to Thailand and co-founded The Cabin Chiang Mai, which became a multi-national treatment provider – The Cabin Addiction Services Group which now has nine facilities in five different countries.

Alastair is the author of the Cabin group’s clinical method ‘Recovery Zones’, an ‘all addictions’ model used to treat both chemical and process addictions. Recovery Zones imparts 12-step abstinence principles using secular terminology and is augmented by mindfulness meditation (or Vipassana) which is native to Southeast Asia. Alastair is also well known as a specialist in working with men. In 2016 Alastair pioneered The Edge, which was the first rehab in the world to treat addiction and trauma in young men (16–30) by using Muay Thai kickboxing and triathlon training.

Through The Cabin Foundation, Alastair and his graduates at The Edge, regularly embark on competitive triathlons (from Olympic distance to Ironman distance) to raise funds for poverty stricken, methamphetamine-affected hill tribe villages in the Golden Triangle area of Northern Thailand.

Alastair is regularly called upon as a keynote speaker at the world’s biggest industry conferences, including ICAAD and WCASD. Alastair regularly authors articles for addiction journals and is widely known as an innovator in physical activity in trauma and addiction treatment as well as his groundbreaking work to make 12 steps and CBT more accessible using modern terminology. Alastair is also a familiar face on the TV in Asia and recently appeared on ABC News in Australia and in the documentary Between The Lines. He writes on addiction for many publications including Tatler, Drink Drug News, CNN and Asian Correspondent. Alastair features regularly across all media both in South East Asia and in the UK.

A former addict himself, Alastair’s early life was a challenging one. He managed to pull himself out of addiction in 2001 and his first foray in helping other addicts on the road to recovery was as a volunteer on some of London’s roughest estates.

Alastair upholds the philosophy: ‘Addiction is a search for safety and meaning in a fast changing world. It cuts across all human cultures and socioeconomic groups and manifests itself in many different ways. Some addicted people use drugs, others use food, some gamble or act out in chaotic relationships. It is caused by isolation, childhood adversity, and the loss of traditional belief systems and culture. By coming out of isolation and finding a potent source of meaning we can change the way we think and have a life beyond our wildest dreams.’

Alastair is currently writing a book that is likely to be published end of next year, the working titles is: Answer to Zarathustra: The Wisdom of Addicts in a Godless World. It addresses nihilism in modern age and the increasing levels of isolation, loss of community and traditional belief systems and how addiction is a search for the transcendental, in a world bereft of meaning. He was recently interviewed by Dennis Relojo.